What's Ahead for Bitcoin?

A panel discussion with an internationally renowned expert on cryptocurrencies - Dr. Will Luther As the popularity of Bitcoin continues to rise, the UK Institute for the Study of Free Enterprise is hosting an open dialogue with an internationally renowned expert on cryptocurrencies, Dr. William Luther. Dr. Luther and panel will discuss what it means to mine Bitcoin, whether or not it's a worthwhile investment, and the future role of digital currencies. Please join us for this conversation. 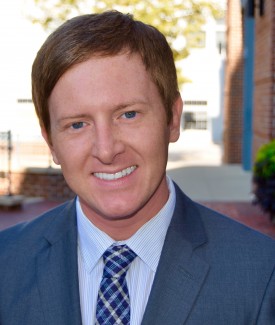 William J. Luther is an assistant professor of economics at Kenyon College, an adjunct scholar with the Cato Institute’s Center for Monetary and Financial Alternatives, and a fellow with the Sound Money Project. As of January 2018, he was ranked 27th on the Social Science Research Network’s Top 8,000 Economics Authors. Luther’s research focuses primarily on questions of currency acceptance and the role governments play in determining commonly accepted media of exchange. He has published articles in leading scholarly journals, including Economic Inquiry, Public Choice, and Contemporary Economic Policy. His popular works have appeared in The Economist, Forbes, and U.S. News & World Report.

An internationally renowned expert on cryptocurrencies, Luther’s research has been cited by major media outlets, including NPR, VICE News, Washington Examiner, The Christian Science Monitor, and New Scientist. Luther earned his MA and PhD in Economics at George Mason University and his BA in Economics at Capital University. Shane Hadden is a Lecturer of Finance at the University of Kentucky, where he teaches Financial Innovation and Venture Finance. Mr. Hadden is also the founder of the Currency Report, an online platform for promoting the adoption of a decentralized global currency. He is a Certified Bitcoin Professional, a Chartered Financial Analyst and a member of the New York Bar. He received a B.A. in Economics and International Studies from Miami University and a J.D./M.B.A. from Georgetown University. Jon practiced law for 14 years, specializing in Mergers & Acquisitions, and complex financial transactions, such as Leveraged Buyouts, in private practice. Jon left the practice of law to join a Fortune 500 company and served in a number of roles over the next 10 years: Managing Director of Corporate Development, Chief Financial Officer and EVP of International. He also served on the Board of Directors for 5 years. In 1998, Jon founded a company engaged in software development for the recruiting industry. He sold the company in 2000 and became CEO of the acquiring company for the next two years. In 2003, Jon was recruited to become CEO of a global recruiting company and remained in that role for 10 years. After retiring as CEO, Jon launched a third career in teaching and consulting, working with Private Equity Companies, and start-ups. Jon has served on the Board of Directors of several Fortune 500 companies, other public companies in the US and UK, and multiple smaller companies. Jon is a member of Hyde Park Angels, which specializes in start-up financing.