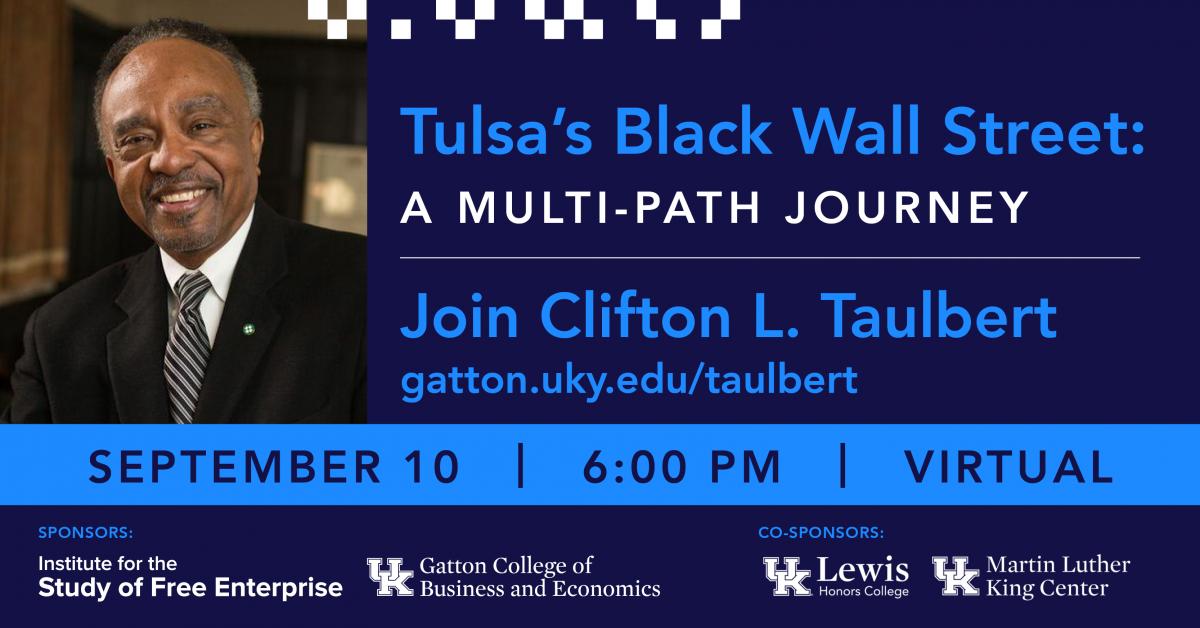 In 2021, Tulsa, Okla. will observe the centennial of the 1921 race massacre that destroyed Tulsa’s Black Wall Street (BWS), built in a section of Tulsa called Deep Greenwood.

Taulbert’s conversation will give audiences the opportunity to see the many pathways that would eventually bring together the minds and the people, African Americans and native freedmen, who dared to dream and to live big. Taulbert will set BWS in the context of history to include ancient Africa, the transatlantic slave trade, the  1832 trail of tears,  the 1863 emancipation, the 13th amendment, Okla. and Indian territories, the 1905 oil discovery, the birth of Deep Greenwood (aka Black Wall Street) in 1906, and eventually, the Oklahoma Territories becoming a state in 1907.

The United States Supreme Court was not the picture that Clifton Taulbert saw each morning growing up on the Mississippi Delta. He saw cotton fields - a world he thought would never change. But change it did, and the podium at the Library of Congress, where he was once invited as the special guest speaker of former Supreme Court Justice Sandra Day O’Connor, is just one of the many places where his journey has taken him. The former migrant cotton picker, who never saw a city with his waking eyes until the age of twelve, is now an award-winning author, an entrepreneur, educator, inspiration, and the CEO of two different companies.

Taulbert’s lessons from the Delta continue to impact his life. Time Magazine’s recognition of Taulbert as one of America’s top emerging entrepreneurs is a credit to his Delta uncle, Cleve, whose story has been captured in the international bestseller, Who Owns the Ice House. Uncle Cleve introduced his nephew to the power of “gumption,” widely recognized in our modern society as an entrepreneurial mindset. Uncle Cleve’s teaching and the mindset it produced propelled Taulbert into the world of fitness, where he helped to bring the StairMaster exercise system to the world. Not one to rest on past successes, Taulbert is now in his seventh year as President and CEO of Roots Java Coffee, the only national coffee supply company wholly owned by African Americans.

Taulbert, the writer, is recognized and embraced around the world, from South Africa to Australia. His first book, Once Upon A Time When We Were Colored, became an international bestseller and a major motion picture. The United States government selected the book as a gift for Nelson Mandela upon his release from prison in 1990.

His most recent book, The Invitation, was chosen by the architect of the United States capitol as part of the 50th anniversary celebration of the signing of the 1964 civil rights legislation. Taulbert has written fourteen books in total, produced a major motion picture, and served as a consultant on several documentaries: "Jews in the Delta" and the Emmy-award winning "Boomtown: An American Journey," which details the birth of Tulsa, Okla.

Though recognized now as an entrepreneur, writer, and lecturer, Taulbert’s background includes banking as well. He was a founding member of a de novo bank in Tulsa, which later sold. Today Taulbert, a graduate of the Southwest Graduate School of Banking at Southern Methodist University, serves as a director of Central Bank of Oklahoma.

Taulbert’s reputation as a human capital development consultant, which he pursues as the CEO of The Freemount Corporation, has garnered him opportunities to address business and academic audiences nationally and internationally. He has presented at Charles Sturt University Business School in Australia, Harvard University Principals Center, the United States Air Force Academy, the Kansas City Federal Reserve Bank, Bank of America, ONEOK Pipeline Company, BMW, and the Oklahoma Bankers Association. He has spoken to K-12 educators from the Mississippi Delta to China and has influenced international school leaders throughout Central America. In 2018, Taulbert was asked by the University of Utah to open their 2018 Fulbright Scholars Innovation Conference, where he spoke to one hundred and twenty scholars from around the world. Taulbert’s address, "The Revival of the Inquisitive Mind," was widely enjoyed at the U.S. State Department-sponsored conference.

Taulbert, a member of Phi Beta Kappa, graduated valedictorian of his high school class. He now serves as a trustee for the University of Tulsa and is on the board of reference at Oral Roberts University. In 2017, Ambassador Barbara Stephenson, President of the American Foreign Service Association, presented Taulbert with the 2017 Citizen Diplomat Award, the highest honor given by Global Ties U.S.

Taulbert has been inducted into the Enlisted Airman Hall of Fame. He is also a recipient of the 27th NAACP Image Award for Literature. He is a trustee for the Tulsa Library Trust, the Oklahoma Foundation for Academic Excellence, and the Tulsa Historical Society. He serves on the Eudora Welty Advisory Board, the Anne Kathryn Sickle Cell Fund, and the Indian Nation Council of Boy Scouts.
Taulbert lives in Tulsa, Okla. and shares his life with his wife, Barbara. They have one son, Marshall Danzy Taulbert, a film and fashion entrepreneur in Los Angeles.