Measuring the Spread of COVID-19 in Kentucky: Do We Have the Right Data?

Abstract: We examine various measures of COVID-19 infections, hospitalizations and deaths, with an emphasis on data for Kentucky. We find that: Data on the number of new reported cases of the disease obtained from convenience samples (as opposed to representative random samples) is an inaccurate measure of the spread of the disease in the State. Using CDC data and national studies, it appears that there were ten times the number of infections in March than reported for Kentucky at the time and by September the State is still capturing only one out of two people infected.

A better measure of new cases can be obtained from model-based estimates of new daily cases that adjusts for the number of people being tested, the demographic characteristics of who is being tested, hospitalization rates, death rates, data on mobility, as well as the known biases in the reported data.

By the end of September, the state had confirmed about 66,000 cases, while model-based estimates and CDC data indicate from the that the true number at that point was over 200,000 cases.

There is little indication that Kentucky hospitals were ever in danger of being overwhelmed with patients. We estimate that around 1.5-2.0 percent of people who contract COVID-19 end up in the hospital while around 0.4 percent of them end up in the ICU, and these numbers have remained fairly constant since May. The percent of ICU beds used by COVID-19 patients has ranged between 10-15 percent while the rate of hospital bed usage has been in the 3-4 percent range.

The estimated case fatality rate was around 10 percent at the start of the pandemic, but then fell quickly and seemed to level off at around 1.5 percent towards the end of September. In contrast, the estimated infection fatality (IFR) rate is fairly constant over the entire period at around 0.7 percent. This is consistent with the State data on new reported cases being an underestimate of the number of people who actually contracted COVID-19

People aged 80 and older have accounted for around 50% of the monthly deaths since June, despite being only 5% of the population of the state. The share of new deaths among people over 60 has remained fairly constant at around 90%. Over one-half of fatalities have occurred in nursing home patients, and the proportion has been stable since March.

To accurately track the spread of the infection requires random testing of the population, with samples that represent people by age, gender, ethnicity, and place. This has been done on a limited scale in Jefferson County, as well as in the state of Indiana, but has not been implemented statewide in Kentucky. Another promising tool is the sampling of sewage wastewater around communities. This method can detect the presence of the virus in a population, even as small as a dormitory or nursing facility. While used in Jefferson County, as well as other places around the world, there has been no statewide program in Kentucky.

Evidence on the cost of shutting down schools and businesses, along with the IFR estimates by age and the share of deaths in Kentucky by age make clear that people under 65 are paying the biggest share of the cost of fighting the disease but are receiving the smallest share of the benefits. Given this, it is not surprising that parents are pushing for schools to reopen and people around the world are protesting efforts to reclose the economy. It would seem like the best course forward would be to obtain better data, and use the reliable data we already have, such as data by on death rates and IFR by age, to better direct efforts and resources at fighting the virus so we can protect the elderly and other vulnerable populations while keeping schools and businesses open.

The coronavirus is a serious disease that is imposing enormous costs on the people of Kentucky through an increase in the number of people getting sick, being hospitalized, and ultimately dying. However, the costs of the polices designed to help slow the spread of the disease, such as closing businesses and schools, are also large (See Coomes, 2020 for a discussion of these costs) so it is important to ensure that we are adopting the most efficient, effective and well targeted policies to combat the disease, which requires having the necessary data to design and assess these policies. Failing to use the bests data results in a waste of taxpayer money and unnecessary deaths. Unfortunately, given the limitations of the existing data resources, public officials do not have any better understanding of how the disease is spreading throughout the State or the deadliness of the disease than they did back in March, This means that policy decisions moving forward are going to be as inaccurate as ones made in the past. Given the impact of the disease it is hard to understand why the state continues to ignore the recommendation of the National Academy of Sciences, Engineering and Medicine, as well as the evidence for random testing programs implemented in Jefferson County and Indiana, and devote at least some portion of their testing budget to periodically testing random samples of the population so that we can develop better measures of how the disease spreads through communities, a better understanding of the fatality of the disease, and better measures to protect the most vulnerable people in Kentucky while limiting the economic and social burden of public health policies. Given the enormous costs the disease is imposing on Kentuckians, it seems worth making the relatively small investments in collecting better data that could help save additional lives. 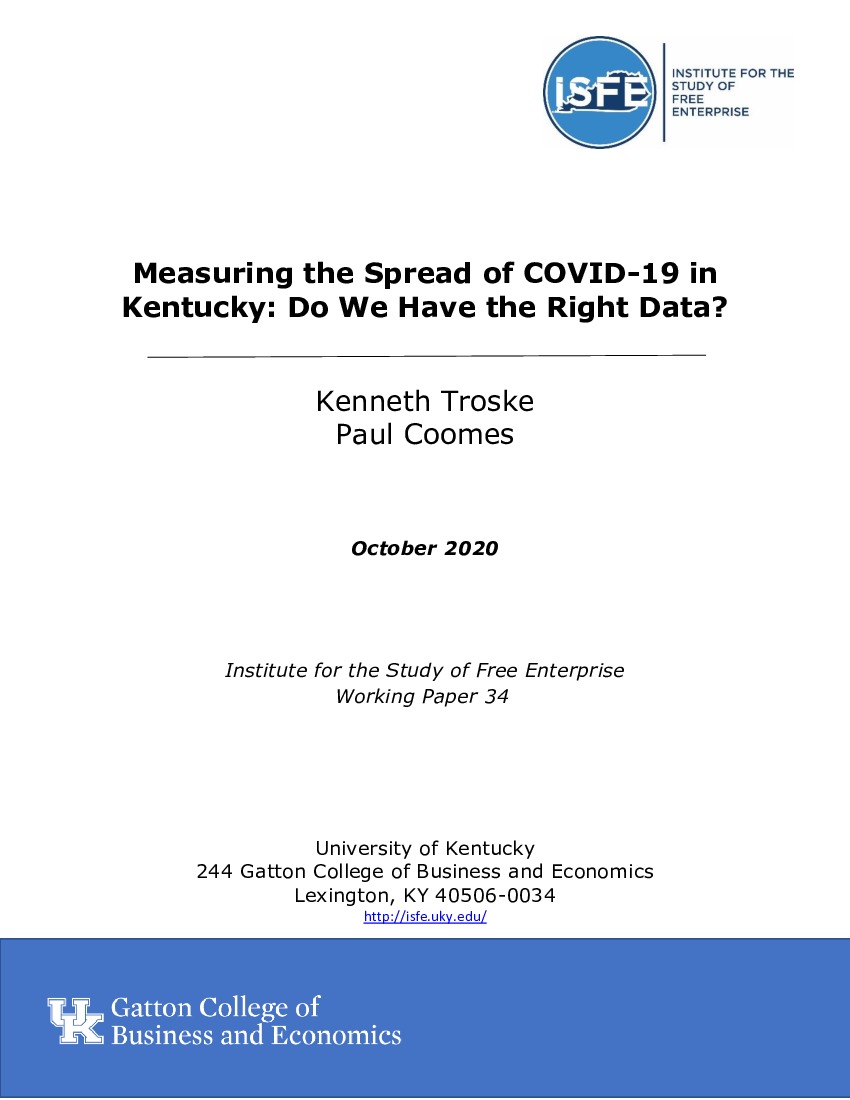